THE SPANISH RICE DISTRICT MEETS THE ERMES PROJECT: DISCUSSION ON SELECTED 2015 VHR MAPS AND PRESENTATION OF THE FIRST VERSION OF THE ERMES SMART APP

On the 21th July 2015, an open day meeting with current and potential Spanish users and authorities was held in Consejo Regulador Denominación de Origen (CRDO) ( Regulatory Council of Designation of Origin) in Sueca, Spain. The meeting was organized by ERMES project representatives from the two Spanish partners: UVEG and UJI.

After an overall presentation of the project and its preliminary results, the meeting focused on interaction with the rice cultivators and technicians. UVEG and UJI partners demonstrated useful tools and maps, created within the ERMES project, that can help to support the agricultural practices in the ongoing and future seasons.

In particular, the UVEG researchers discussed a series of satellite WorldView2 images acquired by the researchers on last 5th June and 8th July. The images showed the NDVI (intimately related with the vegetation greenness) of the Spanish study area.

Special attentions was paid to selected rice fields belonging to the farmers attending the meeting, which represent part of the ERMES Spanish local study area.

UJI researchers also introduced the first version of the ERMES Smart App, which offers rice farmers and field workers a practical tool to record and document their field activities. The functionality of the Smart App was demonstrated, and UJI researchers helped the attendants to set up an account to start monitoring their parcels.

This discussion and interaction with end-users provided the researches with valuable end-user feedback, both on the ICT tools, and on the usefulness of information contained in the maps. This serves to further improve ERMES products, and better align them with the management practices shown by the Spanish rice cultivators and authorities that are involved in the ERMES project. 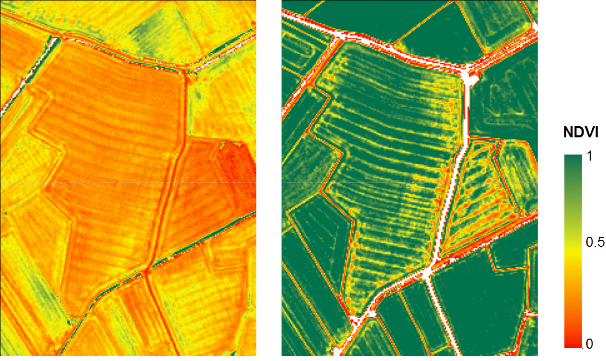 An example of NDVI map presented to the Spanish farmers during last 21st July ERMES meeting. These are two high resolution NDVI maps taken from the WorldView-02 images of 5th June (left) and 8th July (right), clipped on one Albufera end-user’s fields. The index is sensitive to the green biomass on field.