THE NEED FOR UPDATED SPATIALIAZED INFORMATION ON CROP STATUS

The agricultural sector is facing important challenges due to several reasons including the continuous worldwide food demand, the increasing price-competition connected with the market globalization and food price volatility (G20 Agriculture Action Plan, 2011) and the need of more environmentally and economically sustainable farming systems in the developed countries.

The agricultural sector in Europe has to maintain competitiveness reducing production costs and minimizing environmental impact of agricultural practices.

The availability of information on crop conditions in space and time is a crucial issue to support the development of more productive and sustainable farming systems. This availability also contribute to increase their competitiveness and to face environmental challenges such as reduction of greenhouse gas emission and water consumption, soil contamination and degradation. Thus, there is a recognized need to develop, validate and apply methods that can operationally provide information regarding crops development monitoring, yield forecasting and estimation, early warning on nutritional and water stress and on biotic and abiotic risks. The development of these methods, requires the application of suitable techniques able to provide cost effective and high quality spatialized information on the agro-ecosystems.

Geo-spatial products and geo-information useful for crop monitoring and management can nowadays be efficiently produced via Remote Sensing and crop modelling systems for both regional and local applications. In this context, the GMES/Copernicus EU initiative and its new European Sentinel missions can provide the necessary framework to move from prototypes of monitoring systems to operational services for regional authorities and agro-market operators. 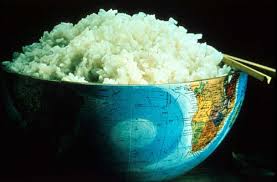 Rice is the world’s most important staple crop. It is the second largest crop in terms of harvested area after wheat, but is by far the most important in terms of human consumption especially in low and lower middle income countries (FAOSTAT 2012). It is a global crop cultivated across a wide range of environmental conditionse is grown under a wide range of management conditions, such as: highly mechanised, irrigated, single summer cropping (i.e. Europe, Japan, USA, Australia, Brazil); the more marginal rainfed rice systems across Latin America, Sub Saharan Africa, South and South East Asia; in rotation with other crops such as the vast rice/wheat double cropping areas of India and China; intensive, irrigated triple cropping (i.e. Indonesia, Vietnam) and various other double and triple mixed cropping combinations across Asia, Africa and Latin America.

Developing countries are extremely vulnerable to the risk of food shortage and/or rice price increase; the 2008 agronomical season showed a relative drop in the global rice production that determined a price increase of 300% corresponding to a value of 900 US$ per ton. Changes in rice production and availability can produce food crises and grain price variation that can be cause of social troubles due to economic and political changes. These changes affect also local European production due to market globalization.

Scientific researches related to rice cultivation demonstrated that potential rice production usually exceeds actual yield obtained by farmers. The gap reflects numerous deficiencies in crop management which can be supported by agro-consulting based on a better knowledge of production variability. It has been demonstrated that most of this gap could be reduced by applying rice integrated crop management (RICM) systems (Clampett et al., 2001). The development and dissemination of RICM systems in Europe and Mediterranean countries could help to lower production costs and minimize environmental impact of agricultural practices (Nguyen, 2002). These aspects are necessary for the implementation of the Common Agricultural Policy (CAP is due to be reformed by 2013 ) and to support farmers in developing more economicallyand environmentally sustainable production solution.

MORE IN DETAIL: RICE IN EUROPE

Rice cultivation in Europe has a strong local importance and a long history historical relation, since some farms have continually produced rice for the last 150 years.

Rice farming is typically a highly mechanized monoculture. On average, there is a tractor every 12 ha and a combine harvester every 60 ha. Most of the tractors bought during the last years have more than 100 kW power. Following the adoption of laser levelling technology in the late 1980s, more than 80% of the western European rice land was precision-levelled. Water depth into the basin is kept at 5-7 cm during the first stages and at 10-15 cm after rice tillering, mainly to avoid pollen sterility effects caused by low temperatures. On average, 18,000 to 40,000 m3 ha-1 of water are required during a cultural season. Fertilization is carried out mostly by supplying mineral fertilizers (100, 50, 100 kg ha-1 of N, P, K, respectively). Rice cultivations tyipically show a low nitrogen use efficiency, related mainly to losses due to ammonia volatilization and denitrification. In this context, Leaching of nitrate to groundwater  can be a serious environmental risk to be mitigated. Also, in several areas the phosphorous content in the soil is very high, and could represent an environmental issue for surface water (Choudhury and R. Kennedy 2005, Cho 2003).